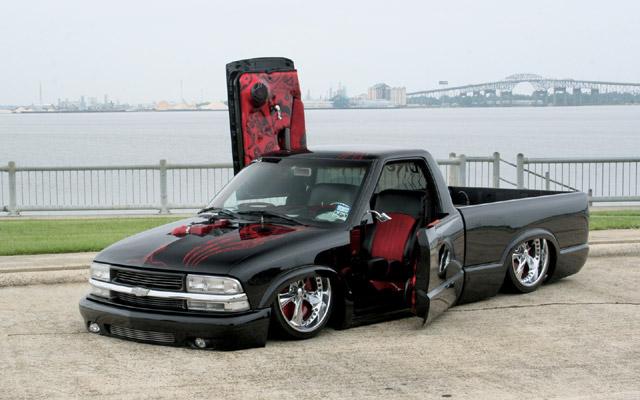 Sometimes car enthusiasts know exactly what they want to do to their vehicle, and sometimes it’s more of a process that happens overtime. Like any modification there are pros and cons to consider when deciding what type of door conversion to install on your vehicle.

Suicide Doors tend to be a popular modification with older, classic cars and trucks as they lend well to the era. However, many new car manufacturers are reintroducing the Suicide Door hinge to current production models so even new body style vehicles can be well suited to the subtle look of a Suicide Door Hinge kit. Suicide Doors can be installed on two or four door cars and are often chosen as a rear door modification when installing another style of hinge on your front doors.

Lambo Door Kits are modeled after the Lamborghini, and are designed to allow your doors to lift vertically in the air.  Originally the lambo doors were installed on sports cars, however any vehicle can be modified to have Lambo Door Hinges. Because the Scissor Door Lambo Door hinges can be adjusted to open to different angles or degrees, they can be tailored to suit the body lines of your vehicle. More boxy, square vehicles (like SUV’s, muscle cars and trucks) look best with a more perpendicular 90 degree opening.  Curvy, sporty vehicles (coupes, convertibles and low profile trucks) tend to look better with a slightly lower degree of opening, mimicking the actual Lamborghini.

Gull Wing Doors are probably the least common type of door modification as they require the most work to install, however this also makes them more popular among car owners who really want to stand out in a crowd. Gull Wing Doors can be mounted in several locations to give you a different look when the doors are open. The traditional mounting point is along the roof line of the vehicle; however vehicles without window frames can install their Gull Wing hinges along the windshield pillar to give a slightly angled Gull Wing look.

Regardless of what style of door modification you chose, they most important thing to consider is quality! Scissor Doors Inc backs up all of its conversions with a Life Time Warranty and stands behind their products and customer service.

Our suicide doors are known to require the least amount of work to install. However we have made another step forward, and areFebruary 13, 2015 0

Check out the new Porsche Boxter / 911 Suicide Door hinges. This set was ordered in a raw metal finish to be painted during theFebruary 13, 2015 0

Another 180 suicide door hinge headed to our good friends in Australia. This one is for a Toyota Hilux. Thanks for your orderMarch 25, 2014 0

In out last post we saw the installation of our new line of suicide doors. Since then we have been getting requests for moreFebruary 5, 2014 0

Good morning installers, your probably on your second cup of coffee by now, so we thought we would post something for you to lookJanuary 14, 2014 0

These corvette hinge kits are precision engineered for each specific application giving them a true bolt on fitment unlike anyAugust 12, 2013 0

We get a lot of calls from folks who are building cars that cannot buy OEM hinges for their vehicle. They often consider changingJuly 19, 2013 0

That’s right Bill, they are ready to go out the door! When Bill contacted us about making a custom offset suicide door hinge END_OF_DOCUMENT_TOKEN_TO_BE_REPLACED